As we all know, in the watch industry, any manufacturer with a self-produced movement will be proud. So far, watch manufacturers that can independently develop and mass-produce high-performance movements are still rare.

Today, letâ€™s talk about the Breitling B01Â movement. According to the official publicity materials, it was known that Breitling began to design in 2004. In the spring of 2006, Breitling produced the first 100% self-made movements. Why is it 100%? Because in 1966, Breitling and three other companies (watching parts supplier Depraz & Cie, movement manufacturer Buren, watch manufacturer Heuer-Leonidas) began to develop the self-winding chronograph movement. In 1969, the world’s first self-winding Caliber 11 was produced.

At the end of 20006, Breitling submitted a test of the movement to theÂ COSC for testing. The movement passed the accuracy and reliability test from the COSC.So, it went on saleÂ in 2009.

Below I will disassemble a B01 movement and analyze it.

After opening, the first thing I saw was a large diameter movement, which reached 30mm and sames with the diameter of the classic ETA7750. It is obvious that this is the best diameter of the chronograph movement. The thickness is 7.2mm, which is a little thinner than the 7.9mm of the 7750. The automatic totem and the lower layer of the splint have clear lettering and good gold plating, reaching theÂ level of the same class movement. Grinding is relatively simple and does not use a too fancy polishing process. 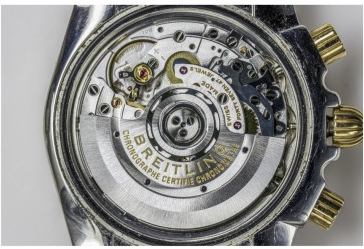 After removing the dialÂ andÂ hands, I have the feeling of disassembling the Rolex 3135, since the similarity is still relatively high. From polishing to calendar fixing, quick-tuning structure, and instantaneous jump structure, both them are strikingly similar. I don’t believe that the two companies have no cooperation. (B01 is on the left and 3135 is on the right)

Since B01 is also advertisingÂ with a calendar function without a forbidden zone, it can be said that it is completely a small revision of the classic structure of Rolex 3135. The instant jump is very fast. However, the splint of this part of Breitling B01 has not been polished. (B01 is on the left and 3135 is on the right)

Now turning the movement over, you can see a large bimetallic automatic turret, which has the advantage that the automatic winding efficiency can be guaranteed. In terms of design, I saw the shadow of Rolex. However, the automatic gyro bearing uses a ball bearing, which is less prone to the phenomenon that the 3135 grinds the plate for a period of time. (B01 is on the left and 3135 is on the right)

Removing the automatic gyro, I found an interesting place, that is, in general, the automatic gyro is fixed in the automatic splint (the red area below). However, the B01 is fixed on the entire timing unit (the yellow area in the below). This design has obvious modular features, which brings certain convenience for assembly and maintenance, and also facilitates the expansion of other functions in the future. This part must be disclosed, the process of engraving the serial number (blue area) is really bad, the lettering is not clear, the depth is different, the deep places are leaking copper, and many fake watches are better than this. 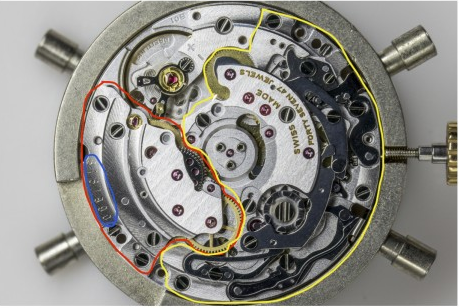 The following figure disassembles the automatic splint. It can be seen that this is a two-way automatic winding structure, whichÂ is characterized in that the jewel bearing material is used in the middle of the automatic reversing wheel, and the wear of such other parts of the metal in the similar maintenance work usually wornÂ relatively large, the use of gemstone materials will undoubtedly greatly reduce wear and improve the efficiency of automatic winding, because the running resistance is reduced. 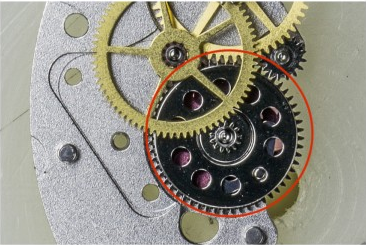 After removing the automatic splint, you can see that the escape wheel is equipped with a shockproof oil retaining system. Simply say, it is added a a Kif shock absorber (red circle below). This position belongs to the last link of the circular motion in the whole transmission process. The advantage of this is that it can maintain a storage of oil for a long time, reducing operational resistance, and the advantage of oil retention is greater than the advantage of shockproof. 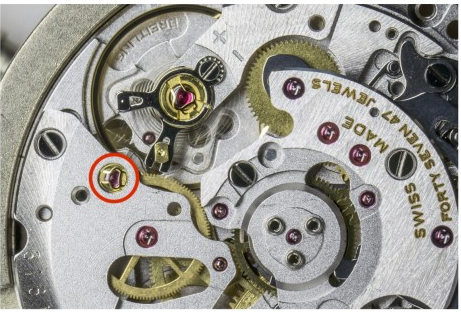 At this time, you can also see the B01’s column wheel system. The column wheel is almost standard for advanced chronograph movements. It has high requirements for machining and grinding, and is an important part of the timing. 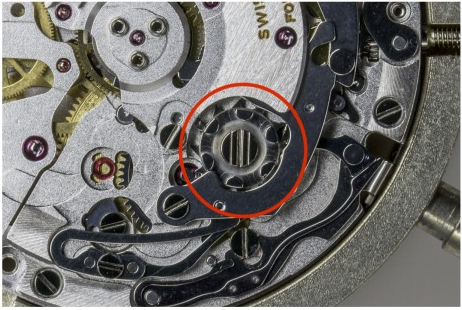 The design of the balance wheel is very mediocre. A large self-produced calibre that was launched in 2009 actually used a balance spring system with a card degree. I did not expect that cheap Tissot and Mido will use no card. The advantages of no card degree is not to be mentioned here, not a level of technology. The shock absorber is still kif, but this is not a big problem. After all, changing the cardlessness does not require changes to other parts of the movement. 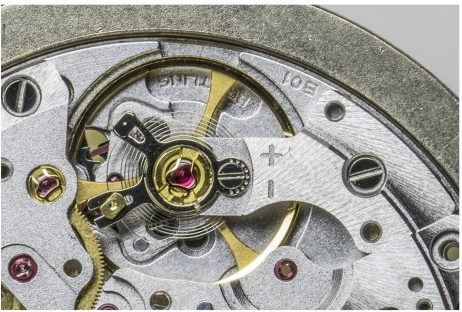 As mentioned above, due to the modular structure, it was quickly dismantled. As a chronograph movement, this design is really convenient for maintenance. However, the grinding of the B01 movement main splint can be said to be basically 0, giving the impression of an industrial semi-finished product. It is better to polish it even just a little. Moreover, there is obviously excessive lubrication and diffusion on the main plate. It may be that the manufacturer is also worried about this movement, so some parts will be refueled. The clockwork part forgot to take a photo, and there is also an obvious Rolex design and polishing style, gold box, 70 hours of power. 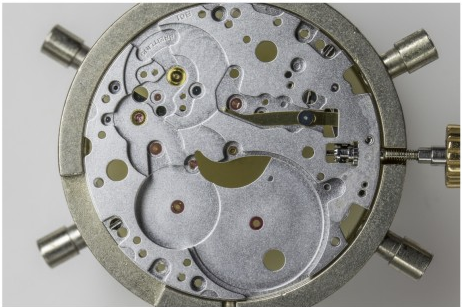 In summary, B01 is generally not a big problem in design, there is still a lot of room for improvement in the details of the process, such as grinding, no card degree, silicon hairspring, etc., we can not deny that B01 is a good chronograph movement platform. Although the movement is 100% self-produced, it still leaves the Rolex trace. Now some models of the Tudor are also using the B01 movement (of course, there are minor changes in the details), and the B20 of the Breitling is also the self-produced movement of the Tudor. It should be that the two sides have deeper cooperation.